And the HCRP Fail Continues...UPDATED 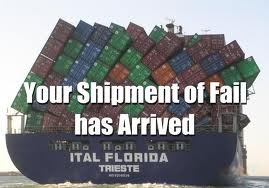 It's worse than we thought.  This local Republican gang is in a downward spiral.  The latest is that the party is doing everything it can to avoid the grassroots.  This is especially hilarious when the HCRP "rapid response team" is out charging critics with not wanting to work with the party.

UPDATE # 2 - After THIS POST where I found two versions of the HCRP story, GUS FARIS updates us here:

Well, Mr. Griffing has struck out again. His new conspiracy theory is as bad as his last one. He claims that KWTP made the offer to fund the convention with the caveat that Ted Cruz speak at lunch. That is wrong on two points. KWTP did not make the offer; I did. And I never tied any requirement to it except that we be the sole sponsor and be recognized for it. (“We” are some TEA Parties and other conservative groups.) When Jared finally called back 8 days after the offer was made and we had a chance to talk, he mentioned the caveat that Mr. Cruz speak. I told him then that I had never said or implied anything like that and asked where he heard it. He said he got that information from Jeff Yates. I asked if he talked to Elizabeth Dillon and added that she is the person to whom the offer was made. Then I added that I don’t know Jeff Yates. I have never talked to him, and I did not know where he would get any information like that. Jared then said he never talked to Elizabeth. So this requirement is a pure figment of somebody’s imagination, sort of an outright lie. What was illicit and inappropriate was when Jared offered to take our money and use the other donations for other activities. I told him clearly that we wanted nothing to do with that. This was not a petulant position as described – we just did not want to participate in any activities that we thought might be illegal.

We did talk about other activities and possibilities for cooperation. We agreed to talk after the convention to explore those. We do have funds that might be used for some of those purposes, whatever they are, should they foster cooperation between HCRP and conservative groups – just like we attempted to do with our original offer. However, Mr. Griffing’s continuing attacks are taking a toll on our friendly attitude and desire to cooperate with all conservative Republicans defeating liberals in the upcoming elections.


UPDATE - Apparently all this attention happened, and then Jared called.  Read the update here.

APR 17
Posted by Robin Lennon
On Monday, April 9, 2012, on behalf of the Kingwood and some other TEA Parties and 912 groups, we contacted Elizabeth in the HCRP office and offered to sponsor the entire cost for the HCRP convention on Saturday, April 21, 2012. We thought this was a reasonable offer since the HCRP would not be charging candidates to speak this year and they would be short funds for the convention. We did not ask for any control of any function of the convention, only that we sponsor the event solely and be recognized for doing so. We made the offer because we believe in the importance of having an open forum between voters and all candidates including those who represent our TEA Party core beliefs.
Elizabeth promised to contact Jared and ask that he call us to arrange how to get the money to the party. Jared never called, and Elizabeth quit taking my calls for the rest of the week. I am very sorry to have to report to you that our efforts seem to have been for naught. Today, we took the money off of the table because we can only assume that HCRP and Mr. Woodfill do not want our money or any association with our TEA Parties. We hope that their own fund-raising activities allow them to sponsor a fair and open forum for all the candidates, and we look forward to participating in that effort.
Submitted by Gus Faris, KWTP Director, 4/16/12 on behalf of Harris County Grassroots Conservatives.
***

Now ask yourself WHY would the party ignore a solution to the highly publicized financial issues that were highlighted (AGAIN!) at the last executive committee meeting?

Why would the office just stop taking calls regarding an offer to help?

Who could possibly benefit from the party ignoring an offer to pay for the entire convention?

And then I think you need to ask yourself whether this is the "solid conservative leadership" that we hear so much about.

And ask yourself how in the world this short-sighted, insular thinking is going to get the job done in November.

Ask how this ill-equipped, poorly-funded cadre on Richmond will launch any kind of effort against their ostensible opposition, when they are too busy fending off offers of help from within their own ideological branch.

You could also ask "What are they afraid of" but I think the above example tells you all too clearly what they're afraid of.

Fishie
Trying to make a difference in the political landscape one day at a time. Or just yapping about what hacks me off. Founder of Houston Tea Party Society and all over Twitter and Facebook and Google Plus. Will Work For Freedom.